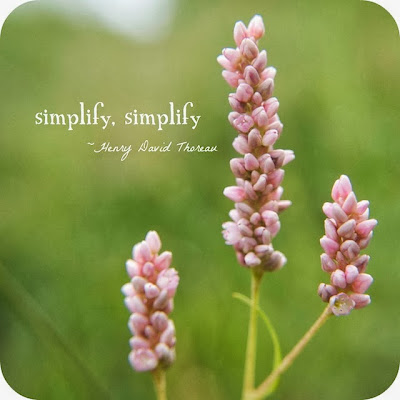 I remember a moment during the late fall last year, when I lost it.   The weather was growing cold, and we were spending most of out time indoors. Every corner was filled with books no one read.  The counters were stacked with papers no one looked at.  Piles of clothes no one wore, yet some how ended up in the mountain of dirty laundry each week.  Don't even get me started on the dishes and toys.  I felt like the walls were closing in on me and I was either spending all my time trying to rearrange the piles into some sense of order or ignoring them, which only made it worse.  It left me feeling angry and inadequate all the time.  That's when I decided it was time to simplify and get rid of the stuff.


It felt good, really good.  I went through the house, room by room, and got rid of anything that was broken, we didn't want or use.  A few boxes went to Goodwill, and it was invigorating to get rid of so many things!  I was dumbfounded at how much that small change had made on the dynamic of our family.  I was more relaxed and creative, and so was everyone else.

As fall changed to winter, the walls began creeping in again.  However, this time, in a different way.  Mike and I were making homesteading plans and all I could think of was how are we going to live in a tiny house with all of this stuff.  That's when my focus shifted.  It was more than the surface clutter, it was the boxes of hand me downs stored in closets, unfinished projects in the basement, and treasures in the garage.  It was time to get serious about getting rid of stuff.

That's when it got epic.  In the spring, we rented a dumpster.  I wish that I'd taken photos, because it was a sight to see.  We worked for 10 days adding to the giant metal box, only for strangers to take things out again.  We'd fill it up more, and again people would come and ask to take things home.  It was fantastic.  Spaces of our home were actually cleared out.  The garage was empty, except for our bikes and tools, and I could see the basement floor!


I hope it doesn't come across like it was no big deal to just get rid of everything.  It wasn't.  It was down right uncomfortable.  So many things we hold onto are associated with loved ones or memories of the past.  It became a process of healing, as well.  Many times we cried, but that's where the list came in handy.  It helped us focus on what we really wanted to have in our life.  Some things we held onto and some we were able to let go.

The boys did great, too.  We included them in every step of the process, and I think that's what worked. They eliminated about half their toys on the first go around.  Also, we never threw anything away without their permission, so it wasn't threatening to them.  We went through    every   single   toy    together and sorted items into 3 boxes,  Keep - Maybe - Toss.   It was interesting to see what they kept and found sentimental, and again, wasn't what I would have thought they'd pick at all.  For the maybe box, we played the game again with only Keep - Toss.

The level of stuff feels about right for now.  We've removed more than half of what we had a year ago!  Now, we're trying to make sure everything has a place, to keep things from creeping back in.  I'll be the first to admit that I'm lacking in the organizational department, but I've found that it's not difficult to keep the house in order when you don't have very much stuff.  I'd like to talk more specifically about what we decided to keep and how we're organizing everything, but that's for another time.

How do you simplify your stuff?